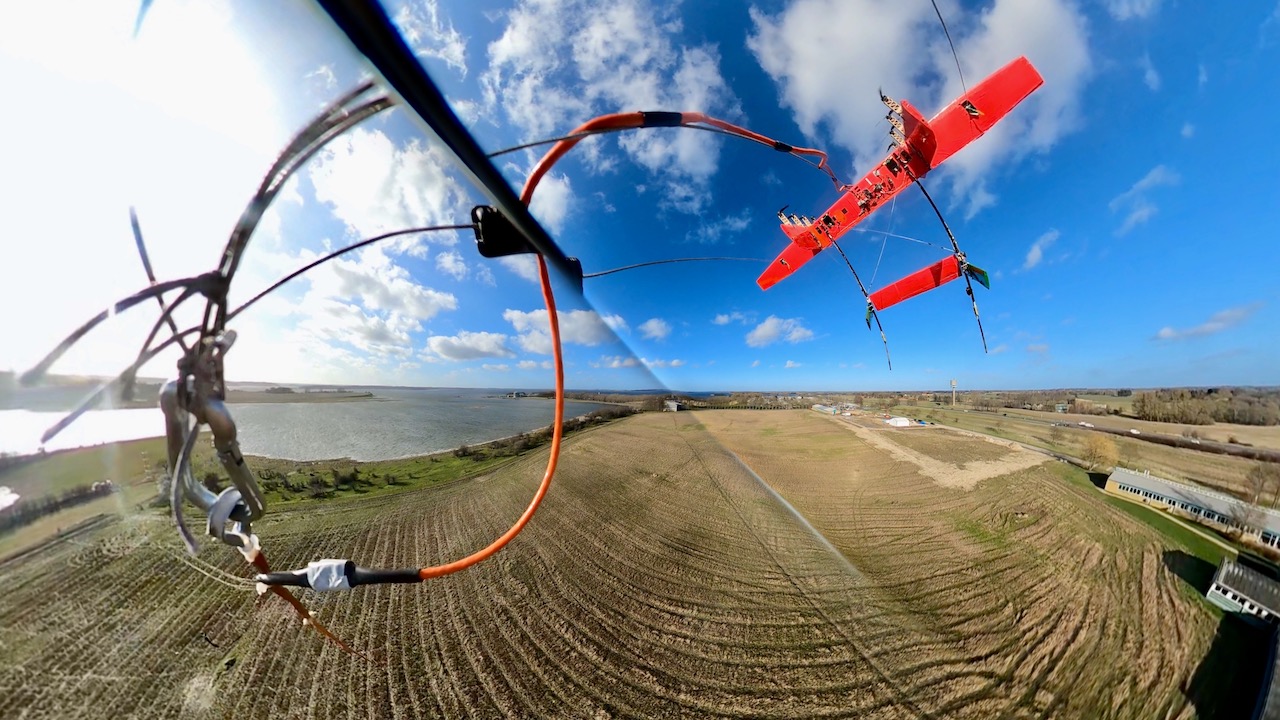 At KiteX, we are working on developing a new type of wind turbine that can capture wind energy much more efficiently. We replace the massive tower, large generator, and long blades with a smaller fast flying wing tethered to the ground that captures wind energy. Without a tower, the wing can reach higher altitudes and uses much less material usage.

Less material (approximately 90%) means that the systems are much more mobile, reducing transportation and installation costs compared to a conventional system. Kites are also much easier to pack down in case of storms. Airborne Wind Energy Systems, when materialized, will directly help solve SDG7 (Affordable Energy) and SDG13 (Climate Action).

Reaching higher altitudes means access to more steady winds and better utilization of the infrastructure that the wind turbine powers since the wind turbine is more “On” compared to conventional systems.

Kites are one of the few technologies that have the potential to significantly reduce the cost of renewable energy on a global scale as identified by the EU Commission, utilities, and prominent technology companies (ABB, Google, EOn, Shell, etc.).

We are not the only ones trying to realize these wings. There exist a network of startups and academics seeking to solve this exact problem. We are both competitors and on the same team at the same time. We are all working towards the same goal, and we have, in the past two years, collaborated directly with competitors KiteKraft, KitePower, and Windlift and Kiteborne.

In February 2020, Google pulled out of its Airborne Wind Energy project: Makani Power. It has been a big blow to the Airborne Wind community, causing doubts about the commercial feasibility of developing these systems at all. Makani had their mouth full. Decreasing conventional wind turbine costs and regulatory challenges pushed them to demonstrate their systems in deep offshore environments. Deep offshore holds two additional advantages for Airborne Wind Energy Systems. Floating platforms can be much smaller than for conventional turbines due to reduced bending moments, and floating platforms for conventional turbines are yet to reach commercial numbers. It is, however, to our understanding extraordinarily costly and challenging to operate in the deep seas. So not an ideal testing ground either.

Commercialization of Airborne Wind Energy, it seems, is as far away as ever.

We have since the summer of 2019 been developing models for an Airborne Wind Energy system that can fly from a tower with a rope shorter than the tower height and filed IP related to the application. A guyed tower is still structurally much more efficient than a conventional tower and 80% mass saving is still possible. A test tower has arrived at our test in February 2020 and we are currently waiting for staff at the university to prepare the site for installation.

We want to develop a 100 kW prototype hybrid (tower-based) Airborne Wind Energy system with the Technical University of Denmark, Danish Technological Institute, and the Delft University of Technology over the next 3 years. After that, a test period of 2 years will follow before the unit can start producing power on islands in need. The total budget for the project is approximately €3M.

In parallel, we are currently exploring options of alternative designs that could bring us to commercializing much faster. Stay tuned.